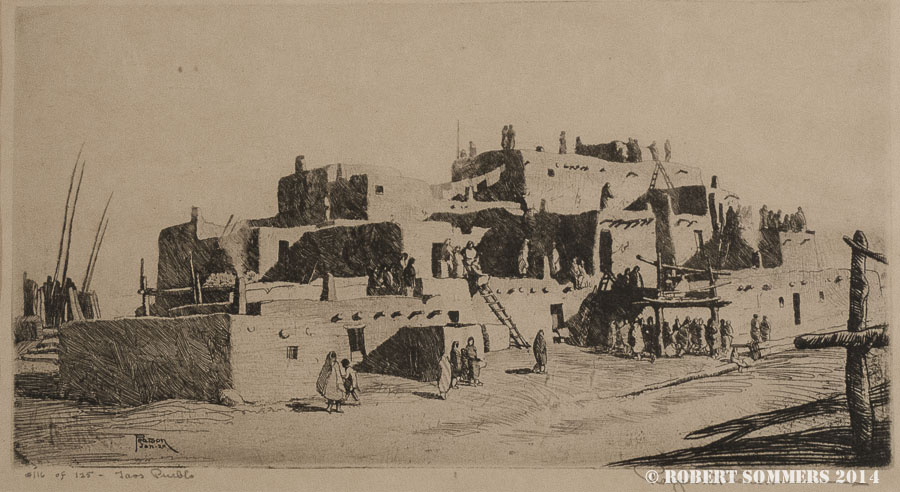 An accomplished American etcher of the early twentieth century, Ralph M. Pearson was born on May 27, 1883 in Angus, Iowa. He studied at the Art Institute of Chicago, under Charles Francis Browne and John Vanderpoel. In 1911 he produced a series of etchings of workers in Chicago.

He was one of the earliest printmakers in New Mexico, settling in Taos about 1915. During his distinguished career his etchings received awards from the Chicago Society of Etchers (1914); the Panama Pacific Exposition, San Francisco (1915); the American Bookplate Society (1917); and the California Print Maker’s Society (1922).

Ralph Pearson’s etchings are included in the Smithsonian American Art Museum, Library of Congress, New York Public Library, Art Institute of Chicago, Mobile Museum of Art, San Diego Museum of Art, and Columbia University. Ralph M. Pearson was also an influential writer on the arts and was the author of such books as How to See Modern Pictures (1925), Fifty Prints of the Year (1927), The New Art Education (1941), and Experiencing American Pictures (1943)

An important element of Pearson’s etched work was his painterly approach to etching. Dismissing many traditional values of the day, he was one of the first American etchers to emphasize formal relations and key elements of design.