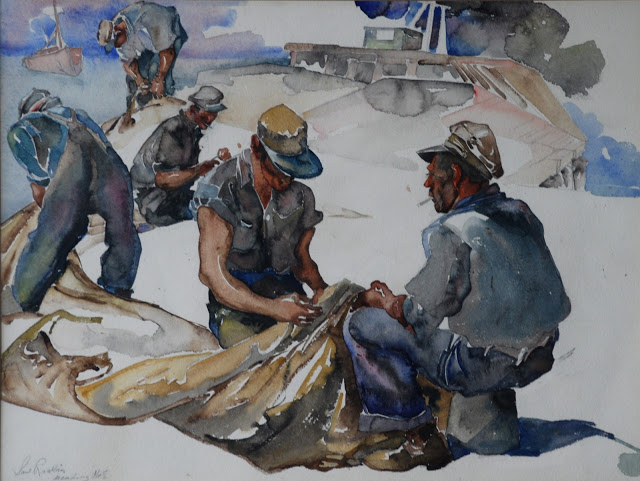 Saul Raskin (1878 – 1966) was a Russian born American artist, writer, lecturer and teacher best known for his depiction of Jewish subjects. He was born in 1878 in Nogaisk in the Russian Empire now known as Prymorsk in Ukraine. He studied lithography in Odessa and then traveled extensively in Germany, France, Italy and Switzerland visiting art schools and working as a lithographer.* Raskin immigrated to the United States arriving in New York City in 1904 or 1905.As a Russian speaker, Raskin became fluent in Yiddish after having come into contact with the literary community of the Lower East Side neighborhood of New York.He worked as a cartoonist and caricaturist* for a number of New York based Yiddish publications including Kibitzer (Yiddish for a person who offers unsolicited views, advice, or criticism) and particularly Der Groyser Kundes (The Big Stick or The Big Prankster), a New York based satirical weekly. He also regularly contributed cartoons to Yiddish newspapers in Europe.Raskin’s cartoons sometimes portrayed the differences between Jewish life in Eastern Europe and in the United States as tales of “metamorphoses”.Raskin was a prolific critic of the visual arts, literature and theatre. He wrote articles for various New York based Yiddish language publications including Tsayt-gayst, the libertarian socialist periodical Freie Arbeiter Stimme (The Free Voice of Labor), the monthly socialist journal Die Zukunft or Di Tsukunft (The Future) for which he wrote forty three articles and Chaim Zhitlowsky’s literary and philosophical Dos Naye Lebn (The New Life) published between 1908 and 1914.Raskin worked to bring Jewish art to the attention of the Jewish public. He believed that art should not be the exclusive preserve of the wealthy and that by collaborating with artists, the public’s interest in art could be cultivated.He conducted museum tours and lectured on art for the Arbeter Ring (Workmen’s Circle). In 1910, the Arbeter Ring Education Committee (EC) was formed to oversee its members educational and cultural development. In 1914 the EC organized ten guided tours of New York art museums most of which were conducted by Raskin. The “shpatsirungen” (strolls) as they were called could draw as many as four to five hundred people. The museums participated by remaining open at special times and providing rooms for lectures at no cost. Raskin’s guided tours included a short historical overview of the exhibits highlighting the prominent artists and their works. Raskin carried out similar educational work outside of New York.In the 1930s Raskin served as the art director for the 92nd Street Young Men’s and Young Women’s Hebrew Association (92nd Street Y) in New York.Raskin was probably known more as a painter and caricaturist within the American Jewish community than as a critic. He worked in various media and was known for his realist approach and attention to detail. His work focused on scenes of Jewish life and tradition particularly in the Lower East Side of New York. His first exhibition was in 1922.Raskin’s paintings, sketches and lithographs* portraying Jewish life in the Yishuv in Palestine were well known in the U. S. having appeared in many exhibitions and the press. They were widely praised by art critics. The lobby of a theater at the corner of Second Avenue and Eleventh Street, at the northern end of the “Yiddish Broadway” in the Lower East Side was decorated with his paintings of Palestine.He made a number of trips to Palestine, at least four between 1921 and 1937, five by 1947 and later to Israel. He stayed at the kibbutz Ramat Yochanan while in the British mandate for Palestine. In 1947 Raskin published Land of Palestine, which contained “more than 300 drawings and paintings made during the artist’s five visits to Palestine, together with short essays on Palestinian life.”He produced poster art to support the Zionist movement. His poster Stand Up and Be Counted from the 1930s shows a central figure of a tall and determined American Jew holding up a Shekel surrounded on one side by images of destruction and on the other by images of a brighter future in a Jewish homeland promised by contributing to the Zionist organization.Raskin also provided illustrations for a number of Hebrew texts such as Pirkei Avot: Sayings of the Fathers (1940), the Haggadah for Passover (1941), Tehilim. In 1960 Raskin published the book The New Face of Israel. In 1962, when Raskin was in his eighties, he published Personal Surrealism, an illustrated book that included his thoughts on surrealism, dreams and his life in a mixture of Hebrew and English.Politically, Raskin described himself as initially an “International Marxist”, then a “Social Revolutionist”, later a “Bundist” and after World War I, a “Jewish Nationalist”. Following the Balfour Declaration of 1917, Raskin became an ardent Zionist.On Raskin’s eightieth birthday he said “I am an artist and I am a Jew, but first and above all, I am a Jewish artist, for Jewishness is the source, the centrality, the essence of my art, as it is the essence of my being.”

Raskin was a member of the American Watercolor Society*, the Society of American Etchers*, the Audubon Artists* and the New York Watercolor Club*.

Personal life
Raskin married Rae Malis. They had at least one son, Eugene Raskin. Raskin’s wife Rae also wrote for a number of publications such as the mass circulation Yiddish daily nationalist-Zionist newspaper Der tog in the late 1910s and the nonpartisan Froyen zhurnal (The Jewish Women’s Home Journal) in the early 1920s. She also wrote articles about Federal and State governments and the setting up and organization of a woman’s club.