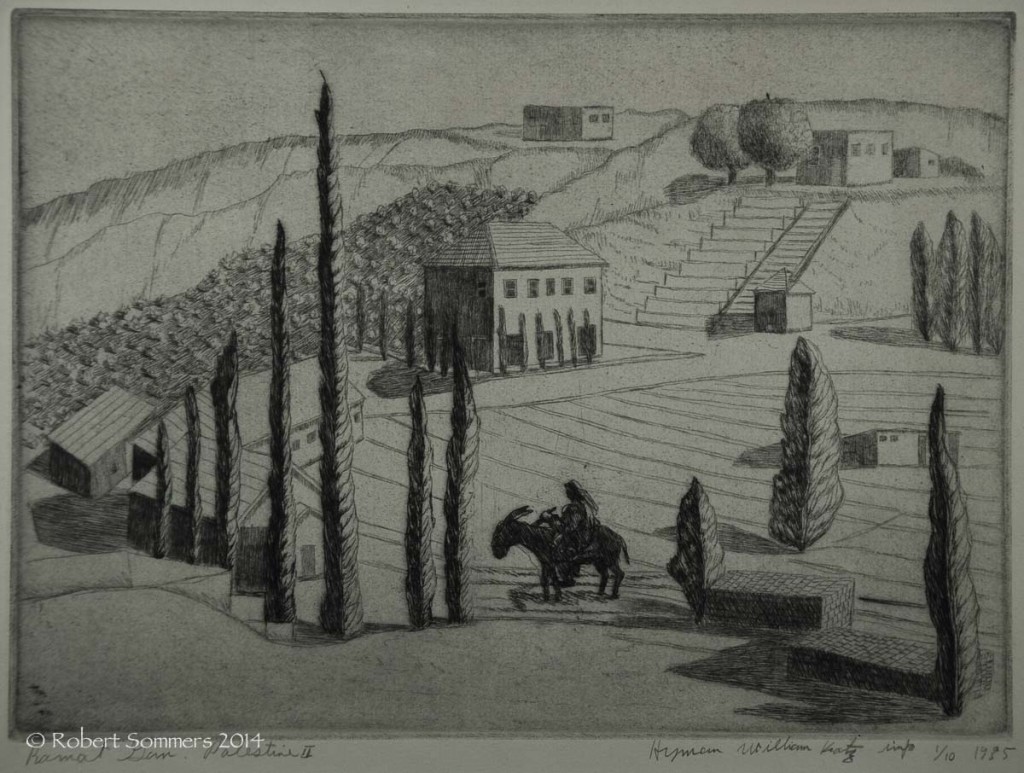 From Askart: A great New York artist of the Depression era, Hyman Katz studied etching under William Auerbach Levy, in Manhattan, and under Miller at the National Academy of Design. Katz’s first etchings date from the early 1920’s. During the following twenty years he created many extraordinary views of his native city and elsewhere. However, coming from somewhat impoverished surroundings, Katz was mainly ignored by Manhattan’s art critics and societies. Help came from the New York branch of the W. P. A. — the now famous Works Progress Administration. Founded by President Roosevelt in 1935, the W. P. A. actively assisted artists during the bleak years of the Great Depression. Without its aid, most of the many masterpieces created by this generation of artists would not have been made. The W. P. A. commissioned a number of original etchings from Hyman Katz, publishing them in editions of twenty-five impressions or less.

Recognition of Katz’s genius came to him late in life. Social realism was the clarion call of American art during the 1930’s and 1940’s and the unique, highly decorative genius of Katz’s etched art was simply beyond most artistic institutions. Much more akin to our modern eyes, collectors today recognize the wonderful simplicity and vision in Katz’s art.

A note should here be made about Katz’s somewhat confusing methods of signing his etchings. In the past I have had etchings by Hyman Katz signed, ‘William H. Katz’, ‘Hyman William Katz’ and ‘Hyman Jeff Katz’. I can offer no speculation concerning why he changed his given names but examination of both the etchings and the handwriting verifies that it is one and the same artist. Katz did not number his original etchings. Most of his art, however, was printed by him and appeared only in very small editions.