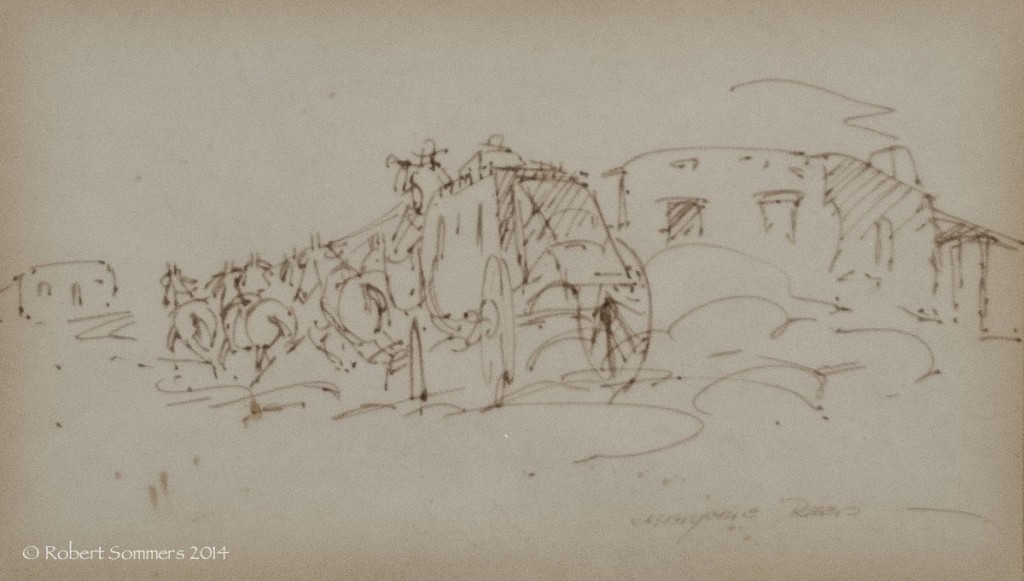 Born in Springfield, Illinois and raised in Los Angeles, Marjorie Reed gained a reputation for paintings of western scenes, particularly Butterfield Overland Stage coaches and other scenes of cowboys, horses and figures associated with the Overland Mail Route.  Sometimes she signed her paintings with men’s names including Harvey Day and Fred Day.

At age three, she began art lessons from her father, Walter Stephen Reed, a commercial artist, whom she later assisted in the designing of Christmas cards and with illustrations for the Mickey Mouse Beverage Company, affiliated with Walt Disney.  In fact, she was so accomplished that shortly after, she was hired by Walt Disney Studios to do animation.  But she did not like the regimentation of that work.

In the mid-1930s, she studied at the Chouinard Art School and took lessons from Jack Wilkinson Smith, a renowned landscape painters who was a key artist in establishing the Biltmore Salon in Los Angeles.  Knowing her love of the outdoors and horses, he encouraged her to roam the countryside.  She became a friend of Captain William Banning who had been a stagecoach driver for his father Phineas Banning.  She learned the romantic story of the Butterfield Overland Mail Stage, which, from 1857 to 1858, ran from San Francisco to the Yuma crossing on the Colorado River.

In her Model-T Ford with her Alaskan Husky dog, she, based in Los Angeles from the late 1930s to late 1940s, traveled the stage-coach route and sketched for the paintings of her project to learn about and sketch various points along the route.  Her travels included Palm Springs, which she visited many times after her first stop in 1937, and she also spent time in Julian, a California mountain town.

Her “Butterfield Stage” series, about the 1858 Butterfield Overland Stage from St. Louis to San Francisco were completed in 1957 after years of travel and research, and a book titled The Colorful Overland Stage was published with twenty of her color reproductions and text by Richard Pourade.  In 1967, she finished a second set of Overland Stage illustrations focused on Arizona.  A third set was then devoted to New Mexico and Texas and a fourth set to Oklahoma, Arkansas and Missouri.

In her later years, she and her fourth husband, Cecil Creese, a miner, became residents of Tombstone, Arizona in 1963 after living in northern California on the Placer River.

According to her daughter, Judy Morris, Marjorie Reed died in 1997, living in the desert near the Butterfield Stage Station in California.