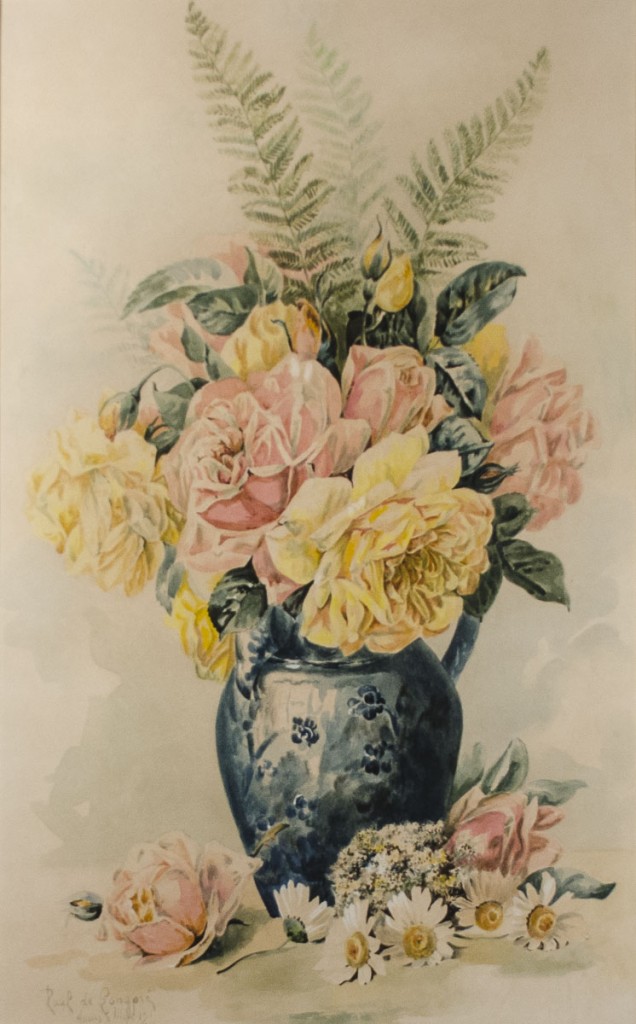 A famous French and American flower painter, Paul DeLongpre was the most significant watercolor specialist to arrive in Los Angeles in the late 19th century and became the city’s first major still-life painter. It is likely he was the first southern California painter to earn a major national reputation.

He was born in Lyons, France, where he was a member of the artistocratic, although not wealthy, Maucherat de Longpre family. Growing up in Lyon, noted for many flower painters because it was the center of the textile-design industry, he was exposed to that subject matter from his youth. At age twelve, he was in Paris, using his obvious talent to paint flowers on fans. By age 21, he had a painting accepted at the Paris Salon. He studied in Paris at the Ecole des Beaux Arts with Jean Leon Gerome and Leon Bonnat and became well known in France, especially with a successful exhibition at the American Art Galleries.

In 1890, he brought his family to New York City where they lived until 1899. There he had a successful career in commercial illustration as a window decorator and also did much painting in the New Jersey countryside as well. In 1896, he had his first New York exhibition, all floral subjects, and it was very well received. Many of the pieces from this exhibition were reproduced as lithographs and distributed across the United States.

At the 1893 World’s Columbian Exposition in Chicago, he met many of the country’s prominent artists, which led to his being invited to exhibit in Boston, Chicago, Philadelphia, New York, and Los Angeles.

In 1899, he moved his family to Southern California because he was so impressed by the floral landscapes and flowers he saw. He paid only ten dollars for a huge lot at Cahuenga and Hollywood Boulevard, now part of downtown Hollywood. He built an extravagant Moorish style mansion surrounded by a three-acre lot on which he grew four-thousand rose bushes. This site became the first tourist attraction in Hollywood, (more thatn 25,000 people annually), and from the gardens, he found many floral still life subjects. The combination of his unique life-style and obvious talent brought him celebrity status, and his name lives on geographically as De Longpre Avenue, named for him, runs parallel to Sunset Boulevard.

He continued to send work back to New York for exhibition at galleries including M. Knoedler and Co. Known for his energy, he was highly prolific, also publishing many chromolithographic prints. He worked tirelessly for a National Art Gallery, and taught watercolor workshops. He died at age fifty-six from what many thought was overwork.

He has become the subject of a major retrospective at The Irvine Museum in California. He was also a talented musician and between 1891 and 1907, completed sixteen compositions.