Please don’t miss my new photography show. It opens July 3, 2014 at Brandon Gallery in Fallbrook. I haven’t had a solo show since 2008 so I am a little nervous. 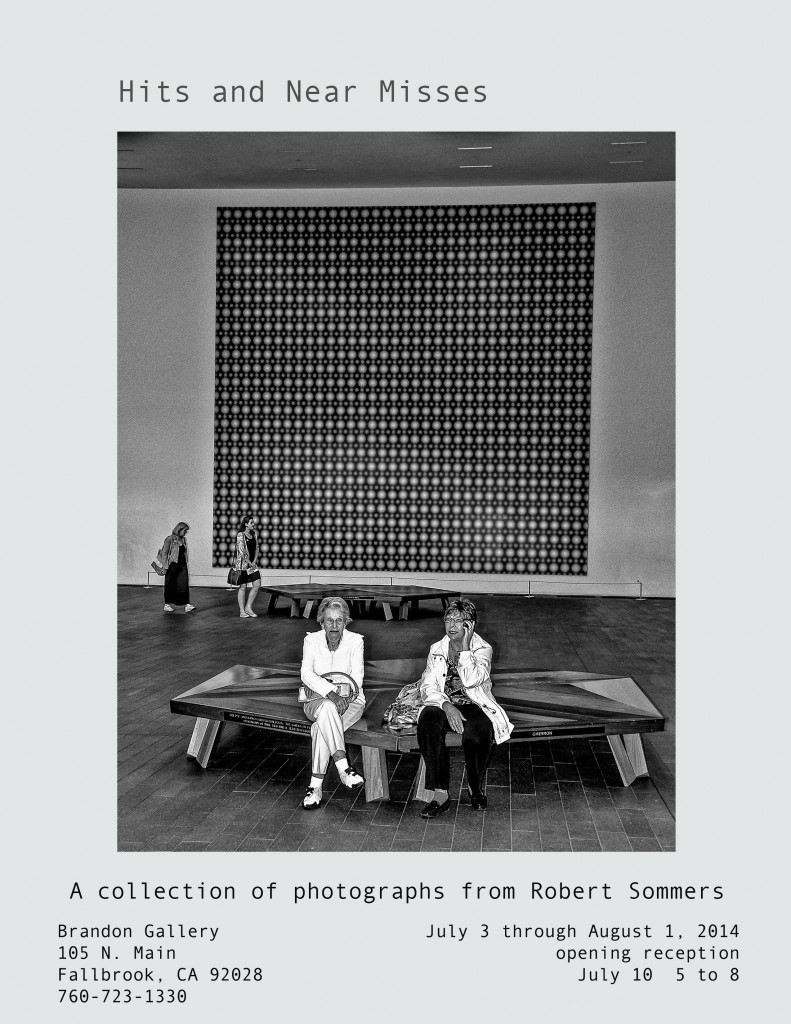 I don’t make it a habit of promoting why own work on my blog but thought, what the hell? Toot my own horn, who else will…Come buy a Sommers. I will be dead someday and this stuff might even be valuable.

The following is a show statement that I conjured up, which by the way, the publicist hated:

I have been drawn to photography all of my life. I’m not really sure if it was a case of nature or nurture. Maybe a little of both. My father was an army photographer in World War II, was instrumental in processing a shot of the earliest atomic blast. I think that the first shot I personally took was with my stepfather’s twin lens rollie way back in 1962 or 63 in Las Cruces. Gave me a real early appreciation for grain and black and white work that has stayed with me. I would often tear photographs out of Life and Look and paste them on the walls of my cubicle at an early age. Perhaps I was born with a critical eye, was a precocious sketcher at an early age. My favorite photographer as a youth was definitely Diane Arbus. Weegie too.Then in college I was introduced to Jo Ann Callis and Roman Vishniak and I think that their approach was a major influence on me as well.
​
I started out as a painter in college but I came up with a case of multiple cancers and the doctors told me I had to get away from the pigments and solvents. Still miss them greatly. I had an artistic itch to scratch. So I headed back to photography.

The thing about taking pictures is that everybody responds differently. You can gravitate towards images that mean something to the artist and that maybe spark an emotive chord and sometimes they can be lost on the world. Or you can always take the slightly safer route and pander to the crowd that just wants to see something pretty. I try both approaches with varying degrees of success.

I put less emphasis on technical photography then some and my work doesn’t please everybody. So be it. If you don’t reach for the boundary and fail occasionally you’re probably not reaching high enough.